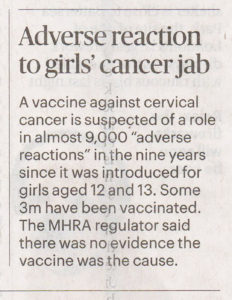 A small article in the Sunday Times (5/11/2017) highlighted almost 9,000 “adverse reactions” to the HPV vaccine against cervical cancer, in the nine years since it was introduced.  This is our e-mail to the Medicines Healthcare and products Regulatory Agency (MHRA) in December 2009 – three weeks after our daughter became ill after her second HPV vaccination. This is our experience of our daughter being part of this HPV vaccine statistic.

I completed a Yellow Card ten days ago (MHRA No. GB-MHRA-XXX xxxxxxxx) but wanted to follow up with further details as I am very concerned about my daughter’s health after her second cervical cancer jab.

We have gone through all channels to get her checked out – twice to our GP who sent her to the paediatric department at Worcester Hospital where she was seen by a consultant twice (and also ENT and Opthalomist). They said that they can find nothing wrong, so they conclude that it is a reaction to the vaccination.

She appears to be suffering from a type of vertigo – very unbalanced, reading is almost impossible for more than a few minutes, her peripheral vision is blurred, she feels nauseous to the point that she barely ate anything for a week and is now only eating ‘sloppy’ foods like soups, milkshakes and liquidised dinner. At times, she has said that she is starving but can’t face eating anything. (She has been taking ‘Sturgeon’ tablets for a week now.) Her symptoms started the day after the jab, she seemed a bit better after four days but became significantly worse two days later. While at the hospital, she nearly passed out having an eye examination (this has never happened before) and more than 24 hours after this, she noticed that her vision in one eye had become blurred which was caused by one pupil being fixed and dilated. Once again the hospital consultant felt there were no underlying complaints, it was unlikely to be the eye drops so presumed it to be related to the jab.

She was a very healthy, sporty sixteen year old prior to the vaccination, but has had virtually 3 weeks off school – our GP has advised her not to go back this week even if she feels better and missed her GCSE mock exams. I am most anxious that these side-effects for ‘Cervarix’ are investigated thoroughly while halting the vaccination programme temporarily. I also believe that parents should have more accurate information from the government about possible adverse reactions so they can make an informed choice – rather than’ dizziness’. I have contacted the NHS with regards to these points but the response I got was that it was for the ‘greater good’ and my daughter will be pleased to be protected from the hpv virus later on in life. Unfortunately, at the moment we are less than satisfied and extremely concerned about out daughter’s immediate welfare.

How stupid of us! How naïve! We thought that our heart-felt letter, written in sheer desperation would result in the MHRA taking immediate action and investigate the safety of the new HPV vaccine, Cervarix®.

This novel vaccine, which was designed to have a heightened immune response (1) and included virus-like particles with an aluminium-based adjuvant (AS04), had only been licenced in 2007 and had ‘black triangle’ status (2) in 2009 to ensure increased levels of surveillance and reporting of adverse reactions.

“….relatively limited information about their [vaccine] safety from clinical trials. These trials generally involve only relatively small numbers of patients who take the medicine for a relatively short time and will identify only the more common adverse effects of treatment. Only when large numbers of patients have taken a medicine are rare or long latency adverse effects identified. Therefore, effective surveillance after marketing is essential for the identification of rare adverse effects, and to ensure that appropriate action is taken.” MHRA (2).

Appropriate Action – a numbers exercise and a waiting game?

We had assumed that in light of our daughter’s severe and sudden illness shortly after receiving her second HPV vaccination, this would be followed up with clinical investigations to establish why her body had reacted in this way and/or clinical investigations into the biological mechanism that triggered it.  Bewildered, when we did not receive a phone call from the authorities after submitting our Yellow Card, we wrote the above e-mail to the MHRA.

However, what we did not realise at the time, is that this important (even vital) post licensure pharmacovigilance relies on statistical data and that the follow-up for ‘effective surveillance’ does not include thorough individual follow up to find out what went wrong.  The MHRA states that it keeps reports of suspected adverse reactions under constant review.  Our child suffering a life-changing adverse reaction does not appear to meet the statistical significance to trigger a thorough individual investigation, we are just one of the ‘almost 9000’ statistic highlighted in the Sunday Times and in the graph below, from a 2015 Independent on Sunday article. 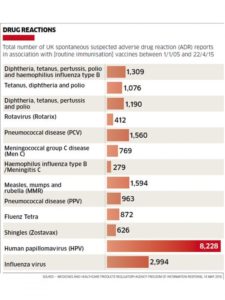 Article in the Independent On Sunday newspaper:
Saturday 30 May 2015

Over the years since this happened to our daughter, we’ve learnt a lot about how the Yellow Card system for monitoring UK adverse drug reactions works. In future posts from Time For Action, we’ll be sharing what we have discovered.

Weʼre raising £2,500 to contribute to European-wide action for Informed Consent with HPV vaccination